THE FATHER
ANTON SVENSSON
Published 24 March 2016
Paperback | £7.99
How does a child become a criminal? How does a father lose a son?
An epic crime novel with the excitement of Jo Nesbo's Headhunters and the depth of We Need to Talk About Kevin, THE FATHER is a work of fiction, inspired by the extraordinary true story of three brothers who held Sweden to ransom, committing ten audacious bank robberies over just two years (in the early 1990s) and who rewrote Swedish criminal history.
None had committed a crime before. All were under 24 years old. All of them would be changed forever.
In this intoxicating, heart-breaking thriller, the fourth brother, who was not involved in the real robberies, tells of three boys who grew from innocent children to become public enemy number one - and of the father who made them that way. This is a gripping story about a family, about the bonds of brotherly love and the complex relationship between fathers and sons.
The Father is the first part of a two-part series, with the second part, The Son, to publish in hardback in 2017.

The thing I find interesting about the book is that it's based on a true story about three brothers that robbed banks in Sweden in the beginning of the 90s. And, I have no recollections of it. Of course, I was around 12 years old when they started to rob banks and to be honest new around that time wasn't something I cared that much about unless it was things like the fall of the Berlin wall, etc. So, I was interested, to read this book even though it was a "fictional story" and not a biographical. There are similarities with the real robberies and the ones that committed them.

I can honestly say that it was not an easy book to read, I had trouble really getting interested in the book and most of the time I felt that the story just wasn't engrossing enough. But, that has more to do with me than the book. The book is in no way badly written, and for the right person that likes stories like this one will this book be perfect. I prefer more mystery stories, this story well, one know how it all will end. What I found interesting were the similarities between the boy's story and the cop that was after them. They both had the same kind of childhood, with an abusing father. They just turned out a bit different, even though one can't say that the cop turned out that well either since he really had relationship trouble.

I think that this book suits people that like to read fictional books about real crimes. If you, like me prefer books that have twists, then perhaps this is not four you. I struggled quite a lot to finish the book, there weren't enough in the story to really seize my interest. The best part was probably reading about the boys childhood and seeing how it formed the men they become.

About the authors
Stefan Thunberg is one of Scandinavia's most celebrated screenwriters. His body of work spans popular TV-series such as Henning Mankell's Wallander and Håkan Nesser's Van Veeteren as well as two of Sweden's biggest box office successes in recent years: Hamilton and Jägarna 2. While Thunberg achieved fame as a screenwriter, the rest of his family became infamous in an entirely different way: his father and brothers were Sweden's most notorious bank robbers, dubbed Militärligan (The Military Gang) by the media. The Father is Stefan Thunberg's debut novel.
Anders Roslund is an award-winning investigative journalist and one of the most successful and critically acclaimed Scandinavian crime writers of our time. Roslund is part of the New York Times bestselling author duo Roslund & Hellström, who are recipients of many prestigious awards, including the CWA International Dagger, the Glass Key and the Swedish Academy of Crime Writers' Award, and who boast sales exceeding five million copies. Films and TV series based on Roslund & Hellström's novels are in the works, both in Hollywood and Europe. The Father is Anders Roslund's seventh novel and the first he has co-authored with Stefan Thunberg. 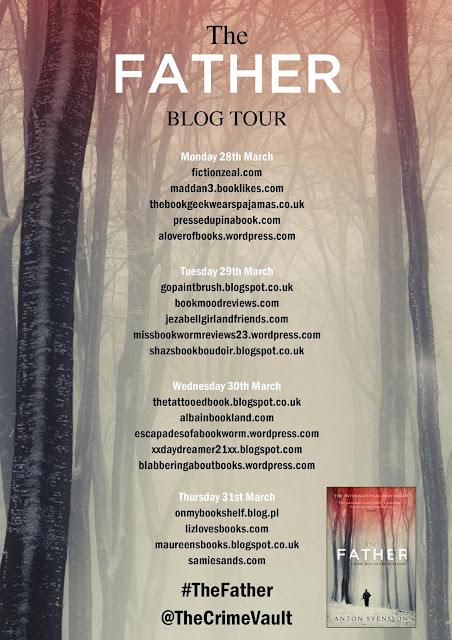