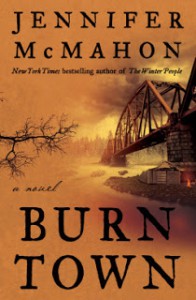 Eva grew up watching her father, Miles, invent strange and wonderful things in the small workshop behind their house on the river that runs through their old mill town. But the most important invention of all was the one that Miles claimed came from the mind of Thomas Edison himself--a machine that allowed one to speak with loved ones long passed. Smuggled out of Edison's laboratory, the blueprints were passed down to Miles, and he's been using them to protect Eva, her mother, Lily, and her brother, Errol, ever since.

Then, one night when a storm is raging and the river is threatening to flood, the machine whirrs to life on its own. Danger, it says. You're in terrible danger. The next thing Eva knows is waking up on the side of the river and seeing her mother's grim face. Eva's father and brother are dead, their house has been washed away and an evil man is searching for them both. They need to hide.

Eva changes her name to Necco--a candy she always loved--and tries to put everything in her past behind her as she adapts to her new life off the grid. But when her boyfriend is murdered and her mother disappears, she knows that the past is starting to catch up to her.

What really happened the night of the flood? As Necco searches for the truth, her journey unites her with two women who are on desperate quests of their own. And as the trio follows the clues to solving the mystery of Necco's past, they discover that sometimes it's the smallest towns that hold the strangest secrets.

**********
I read The Winter People by Jennifer McMahon last year and I loved and I was thrilled for the chance to read this book.

Burntown, in my opinion, did not have the same intense storyline as The Winter People had. What I loved about the Winter People were the dual-timeline and the paranormal aspect of the story. It was thrilling and fascinating to read. Burntown lacked that and the story about Eve (Necco) just never got that intense. At first, it felt like what Necco went through was some sort of apocalyptic event. It was fascinating, but then it kind of fizzled out and I kept on wanting the story to pick up speed again and get interesting again. What made me stick with the story was the machine that made you speak to the dead, I was curious about it and I was also curious about whom killed Milo's mother. Did the killing of Milo's mother have something to do with what happened to Necco's family?
For me was this book not especially memorable. It's not so long ago that I read it, but I found it was hard to write a review for the book since the story just didn't intrigue me so much. However, I did find it got better when Necco started to search for answers together with two very unlikely allies. I would say that the first part of the book before they got together and help each other was not as interesting as when they started to search for answers.
For me was Burntown just not as good as The Winter People. That doesn't mean that this book was not good, it just didn't live up to my expectations I guess.
I want to thank the publisher for providing me with a free copy through Edelweiss for an honest review!