The Lovecraft Squad: All Hallows Horror by Stephen Jones 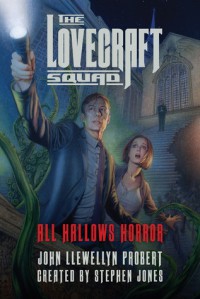 There has always been something wrong about All Hallows Church. Not just the building, but the very land upon it stands. Reports dating back to Roman times reveal that it has always been a bad place—blighted by strange sightings, unusual phenomena, and unexplained disappearances.

So in the 1990s, a team of para-psychiatrists is sent in to investigate the various mysteries surrounding the Church and its unsavoury legends. From the start, they begin to discover a paranormal world that defies belief. But as they dig deeper, not only do they uncover some of the secrets behind the ancient edifice designed by “Zombie King” Thomas Moreby but, hidden away beneath everything else, something so ancient and so terrifying that it is using the architect himself as a conduit to unimaginable evil.

After four days and nights, not everybody survives—and those that do will come to wish they hadn’t. Imagine The Haunting of Hill House, The Amityville Horror, The Entity and The Stone Tape rolled together into the very fabric of a single building. And then imagine if all that horror is accidentally released . . .

**********
The Lovecraft Squad is a book that promising in the beginning of the book, but unfortunately didn't manage to be interesting all the way until the end.
I loved the beginning of the book. Two boys are investigating a building site and they find a skull, a bone and a pot in the place where H.G. Wells house once upon a time had stood. I found this part chilling and the story just kept on being interesting, the discovery of scrolls that tells about the end of time. It was fascinating and intriguing and the idea of 7 people entering the haunted All Hallows Church and spending four days there sounded so incredibly awesome.
However, it's here the story started to drag a bit. At first, I loved the events (apparitions, etc.) at the church, but it came to a point when the story just didn't intrigue as much as it had before. The "surviving" members of the team is going beneath the church and into another world, it was pretty easy to see which world this was, but it took some time before this was addressed by one of them (hint a classic book about hell). And, they traveled from one level to another and I grew more and more bored and I had a suspicion that a certain twist would occur here and I was right.
But, despite this did the book end in an interesting way, and yes I would read the next book in the series. Partly because of the cliffhanger ending, but I did find the book, for the most part interesting.
I want to thank the publisher for providing me with a free copy through NetGalley for an honest review!