Two very different families are bonded by scandal in this sweeping story of love, greed, and betrayal. Anselme Rochefort has built an empire manufacturing serge de Nîmes, or denim. His biggest client? Levi Strauss. As the craze for blue jeans begins to sweep the globe, Rochefort Industries seems poised for untold success. But Anselme can be as cruel and ruthless with his family as he is in business. The Rocheforts’ neighbor Donatien Rouvière has one of the region’s most prosperous farms and is desperate for a son to carry on his legacy. After the births of three daughters, the Rouvières adopt an orphan from the Sisters of Charity convent and raise him as their own. When Anselme suggests uniting the two families by arranging for their children to marry, it seems like the perfect match. But as the lives of the two clans grow increasingly intertwined, dark secrets come to light, including the mysterious circumstances of the death of Anselme’s eldest daughter. With The Rocheforts, Christian Laborie weaves a captivating tale of deceit, intrigue, and the dynamic tension between industrialization and a way of life rooted in the land.
***

It all started with a lie and a lie that decades later almost ruined two people's lives.

This is grand family saga concerning two families, the Rochefort, owner of Rochefort Industries manufacturers of denim and the Rouvière, owner of a prosperous farm.

Anselme Rochefort proposes to Donatien Rouvière that their families should unit, his son should marry Rouvière daughter. At first this seems like marvelous idea, but as the years go and the two families lives gets more and more get intertwined, despite that Anselme tries to stop it. He married of his son for a piece of land, but he doesn't want more of his children falling in love with any of the Rouvières. His greed could be the ruin of his family and a deep dark secret concerning his older's daughter's death could destroy the love of two young people.

When it comes to books that are almost 500 pages long you really need a story, a good written story that can keep the readers interest up. Christian Laborie has really managed that. Even though the story of the two families' takes up decades as the children of Rochefort and Rouvière grow ups and new children was born it never really gets boring. I think one thing that makes everything work besides the good writing is that Laborie includes real life events like WW1. Reading a family set in a historical setting needs to in a good way incorporate everything that was happening around the time frame.

The big secret wasn't that secret in my opinion, I just kept waiting for it to be reviled. But the ramification of it made the last part of the books really intense to read. I needed the truth to come out, it couldn't end so badly. This is actually a book that I really needed a Happy Ever After ending or else it would destroy me. I'm not a big fan of instalove, but damn it, some people just are meant to be!

I enjoyed reading this book very much and I'm looking forward to reading more books by Laborie in the future. 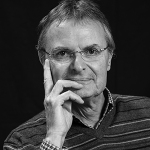 Christian Laborie was born in the North of France but has lived in the southern region of Cévennes for more than twenty years. The Rocheforts is his first novel to be published in English.

** You can enter the global giveaway here or on any other book blogs participating in this tour. Be sure to follow each participant on Twitter/Facebook, they are listed in the entry form below.

Visit each blogger on the tour: tweeting about the giveaway everyday of the Tour will give you 5 extra entries each time! [just follow the directions on the entry-form] Global giveaway open internationally: 5 winners will receive 1 digital copy of The Rocheforts

CLICK ON THE BANNER TO READ OTHER REVIEWS AND AN EXCERPT