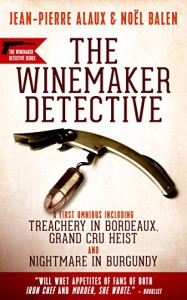 on Tour November 23-December 23 with

The Winemaker Detective: An Omnibus

The ideal gift for mystery and wine lovers — An immersion in French countryside, gourmet attitude, and light-hearted mystery. Two amateur sleuths gumshoe around French wine country, where money, deceit, jealousy, inheritance and greed are all the ingredients needed for crime. Master winemaker Benjamin Cooker and his sidekick Virgile Lanssien solve mysteries in vineyards with a dose of Epicurean enjoyment of fine food and beverage. Each story is a homage to wine and winemakers, as well as a mystery. In Treachery in Bordeaux, barrels at the prestigious grand cru Moniales Haut-Brion wine estate in Bordeaux have been contaminated. Is it negligence or sabotage? In Grand Cru Heist, Benjamin Cooker’s world gets turned upside down one night in Paris. He retreats to the region around Tours to recover. He and his assistant Virgile turn PI to solve two murders and a very particular heist. In Nightmare in Burgundy, a dream wine tasting trip to Burgundy turns into a troubling nightmare when Cooker and his assistant stumble upon a mystery revolving around messages from another era. This made-for-TV series is “difficult to forget and oddly addictive” (ForeWord Reviews).

Jean-Pierre Alaux and Noël Balen, wine lover and music lover respectively, came up with the idea for the Winemaker Detective series while sharing a meal, with a bottle of Château Gaudou 1996, a red wine from Cahors with smooth tannins and a balanced nose.

Anne Trager loves France so much she has lived there for 27 years and just can’t seem to leave. What keeps her there is a uniquely French mix of pleasure seeking and creativity. Well, that and the wine. In 2011, she woke up one morning and said, “I just can’t stand it anymore. There are way too many good books being written in France not reaching a broader audience.” That’s when she founded Le French Book to translate some of those books into English. The company’s motto is “If we love it, we translate it,” and Anne loves crime fiction, mysteries and detective novels.
***
Sally Pane studied French at State University of New York Oswego and the Sorbonne before receiving her Masters Degree in French Literature from the University of Colorado where she wrote Camus and the Americas: A Thematic Analysis of Three Works Based on His Journaux de Voyage. Her career includes more than twenty years of translating and teaching French and Italian at Berlitz and at University of Colorado Boulder. She has worked in scientific, legal and literary translation; her literary translations include Operatic Arias; Singers Edition, and Reality and the Untheorizable by Clément Rosset, along with a number of titles in the Winemaker Detective series. She also served as the interpreter for the government cabinet of Rwanda and translated for Dian Fossey’s Digit Fund. In addition to her passion for French, she has studied Italian at Colorado University, in Rome and in Siena. She lives in Boulder, Colorado with her husband.

Global giveaway open internationally: 5 participants will each win a copy of this book. Be sure to follow each participant on Twitter/Facebook, for more chances to win

CLICK ON THE BANNER TO READ OTHER REVIEWS AND EXCERPT