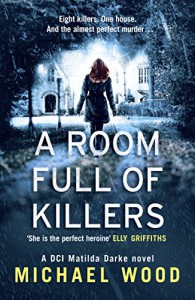 I thought before I read this book that I was quite hardened when it came to crime novel that I could deal with quite a lot (except harming of animals and children), but there were really tough parts in this book that was hard for me to get through and that were the chapters that were the POV of the children, the murderers.

A Room Full of Killers is a dark and tragic book that I devoured. It's engrossing, but at the same time is it not an easy book to get through. DCI Matilda Darke has a lot on her plate, with the release of a book concerning a kidnap case that she was in charge of that went wrong. Also, she is still not completely over her husband's death 18 months earlier. And, now this case at the Starling House. A teenager is dead, and who could have done it? The question of why someone murdered him is perhaps not hard to understand since Ryan Asher is a convicted murderer, but someone got him out of a locked room. Matilda then meets one of the inmates, Thomas, and Matilda is convinced that the young boy is innocent of the crime he is said to have done. Now she wants to find Ryan's murdered and at the same time is she trying to get Thomas free.

I found the book thrilling and intense and the last part of the book had some really great twist to the story. I was a bit surprised on how Matilda could believe someone to be innocent by just looking at him. I mean quite literary just instantly believe his innocent without knowing much about the case. I'm not a police, but appearance can be deceiving, but I guess I much more cynical. Still, it added drama to the story. The side story with the kidnap case was also interesting and I'm really curious to see the impact it will have in the next book. If the kidnapping will be solved. I'm also quite eager to get the two previous books to read!

A Room Full of Killers is an excellent thriller. The characters are well-developed and interesting to follow and the case is interesting and I love the ending!

I want to thank the publisher for providing me with a free copy through NetGalley for an honest review!
Tweet