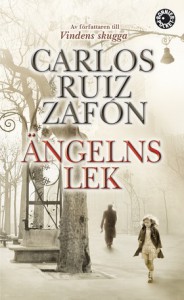 David Martín is a young man that dreams of becoming a writer. Unfortunately he signs a slave deal with the publishers Barrido and Escobillas. But one day a strange man that claims to be a publisher offers him a deal he can’t refuse. But is this man an angel or the devil?

The Angel’s game is the second book I have read by Carlos Ruiz Zafón and a prequel to The Shadow of the Wind. I will probably go against the tide but I found this book much better than The Shadow of the Wind. I liked the characters and the story better in this book. David Martíns life and struggles was captivating to read about. The only thing that bothered me really was the character Christina, I mentally sighed when we were introduced to her in the beginning of the books. She was such a flat and boring character and honestly I just couldn’t stand her. Luckily we were introduced to Isabella later on and she was such a wonderful character that she in many ways compensated the presence of Christina.

One thing I really enjoyed was the link this book has with the first book. Not just the Cemetery of Forgotten Books but also the bookstore Sempere & Sons.

Carlos Ruiz Zafón has a really wonderful talent for telling a story. And I’m looking forward to read his next book The Prisoner of Heaven.