Marie Slaight, author of The Antigone Poems, on tour May 2015 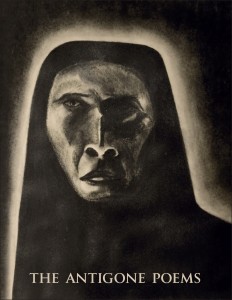 About The Antigone Poems

Featuring poetry by Marie Slaight and charcoal drawings by Terrence Tasker, The Antigone Poems was created in the 1970’s, while the artists were living between Montreal and Toronto. An intensely personal invocation of the ancient Greek tale of defiance, the illustrations and poetry capture the despair of the original tale in an unembellished modernized rendition.   The Antigone Poems provides a special expedition into the depths of the ancient Sophocles tragedy while questioning  power, punishment and one of mythology’s oldest themes: rebellion.

To learn more about The Antigone Poems, please visit TheAntigonePoems.com.

‘I adore these weird little poems. They are surreal and wild. The charcoal drawings are terrifyingly brilliant… I deem this a holy book—written in ecstasy and the madness of genius… It is the flaming center of the volcano that makes us create.’ –The Washington Independent Review of Books

‘Haunting. …a disturbingly poignant and startlingly vivid portrait of one woman’s suffering in the face of pain and heartbreak. It will surely not be forgotten after the turn of the last page.’-The San Francisco Book Review

‘…A beautifully bound, impressive collection with language as evocative as its illustrations.’- Kirkus Reviews

‘…serious, intelligent, one of a kind, and gorgeous. It is a major find, a supplement to or interpretation of the Sophoclean play as much as is Anne Carson’s Antigonick and more unified… I cannot recommend this book highly enough.’ -Kelly Cherry, Blue Fifth Review

We live our lives

The instant between life and death

That is the sun.

First I read the book straight through. Then, I decided to read up on Antigone and learned that she was the daughter of Oedipus and Jocasta. Then, I read the poems to see if I could read into them the tragic life of Antigone. I can't say I did, but still some of the poems are really beautiful and poignant while others didn't stir the same emotion for me.

Marie Slaight wrote these poems in the 70s and artist Terrance Tasker have contributed with drawings. It’s a thing book, only around 90 pages and every poem has its own page, and I love the paper in this book. Just the feeling of turning the pages and feeling the thick paper between your fingers actually makes the reading experience a bit better. The drawings weren’t really my cup of tea and I have to admit that the front cover of the book isn’t something that I find appealing.

…gods speak to the wind and winds whip through me…

It’s a lovely book, and if you get a chance to read it; take it!

MARIE SLAIGHT (1954-) has worked in Montreal, New Orleans, and Buenos Aires as a writer, producer, and performer. Now based in Sydney, Australia, her poetry has appeared in American Writing, Pittsburgh Quarterly, Poetry Salzburg, The Abiko Quarterly, New Orleans Review and elsewhere. Slaight is currently the director of Altaire Productions & Publications, a Sydney-based arts production company, which has been involved in such films as the award-winning documentary Bury the Hatchet, Kindred and Whoever Was Using This Bed.

TERRENCE TASKER (1947-1992) was born in Saskatchewan, Canada. Raised in rural western Canada, he went on to become a self-taught artist and filmmaker. He co-founded and built the original Studio Altaire, a 90-seat theater and visual art gallery that also ran after hours jazz concerts in downtown Montreal. He worked as a set builder as well as working in construction, mining, finance, industrial installations, taxi driving and film projectionist. He created the artwork for The Antigone Poems in the 1970s, while living in Montreal and Toronto.

Wednesday, May 6th: A Bookish Way of Life

Thursday, May 7th: 5 Minutes for Books

Wednesday, May 13th: Peeking Between the Pages

Monday, May 18th: You Can Read Me Anything

Tuesday, May 19th: Everything Distils Into Reading