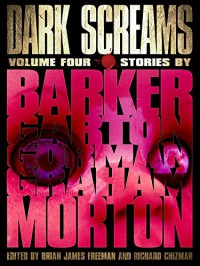 THE DEPARTED by Clive Barker
On All Hallows’ Eve, a dead and disembodied mother yearns to touch her young son one last time. But will making contact destroy them both?

CREATURE FEATURE by Heather Graham
What could be better publicity for a horror convention than an honest-to-goodness curse? It’s only after lights out that the hype—and the Jack the Ripper mannequin—starts to feel a little too real.

THE NEW WAR by Lisa Morton
Mike Carson is a war hero and a decorated vet. He doesn’t deserve to be trapped in a hospital with some black thing sitting on his chest as patients die all around him. His only hope is to take out the nurse—before it’s his turn.

SAMMY COMES HOME by Ray Garton
It’s what every family prays for: a lost pet returning home. But when Sammy, the Hale family sheepdog, appears on their doorstep, he brings back something no parent would ever wish upon his or her child.

THE BRASHER GIRL by Ed Gorman
Cindy Marie Brasher is the prettiest girl in the Valley, and Spence just has to have her. Unfortunately, Cindy has a “friend” . . . a friend who tells her to do things . . . bad things.

Praise for the Dark Screams series

“A wicked treat [featuring] some of the genre’s best . . . Dark Screams: Volume One is a strong start to what looks to be an outstanding series.”—Hellnotes

“The editors have set themselves a high bar to meet in future volumes. . . . It’s going to be a solid series.”—Adventures Fantastic

“Dark Screams: Volume Two [is] a worthwhile read and a great entry to this series. If this upward trend in quality continues, we are sure to see amazing things in the volumes to come.”—LitReactor

“Five fun-to-read stories by top-notch horror scribes. How can you lose? The answer: you can’t.”—Atomic Fangirl

The Departed by Clive Barker

This is one of the least horrifying short story in this collection. Now I have actually not read anything by Clive Barker before, yes I'm just as chocked as you are, but I expected this story to be really dark and horrifying since this is the Clive Barker. I mean even though I haven't read anything by the man do I know how big his name is in horror. But this story felt actually kind of nice, a mother's longing to say goodbye to her son. (3 stars)

The New War by Lisa Morton

Like the Clive Baker story was this not that terrifying either, but I was curious to what the black creature  was it just the old man's fantasy or what? The ending was really good. But not a horrifying story, just a short story about death. (3 stars)

In my opinion the best story in this collection. Felt like reading a homage to Alien. I hate reading about animals suffering, but I think that made this story just a little bit better because I was really uncomfortable with Sammy and the other pets returning home with their...passengers... (4 stars)

The Brasher Girl by Ed Gorman

This one was interesting, but also a bit frustrating to read because I had so many questions toward the end. What was her friend after? Did the friend just wanted the people he connected to kill and for what? Did he get off on it? Did he live on other people killing? Too many questions, not enough answers. But a good ending by the way. (3 stars)

Interesting story, but it seems that the characters in this short story are from one of her book series and personally I just don't like that much reading short stories when the characters are from a series without having read the series first. I could just feel that Aidan Mahoney and Maureen Deauville had a lot of history together and here in this short story we got some glimpse of that. But the short story was not bad and I would like to read more about the Krewe of Hunters. But it also felt a little bit like the odd story out since the rest as far as I know did not base their stories on old characters. (3 stars)

Born in Liverpool in 1952, Clive Barker has written and produced a number of Grand Guignol plays, including The History of the Devil and Frankenstein in Love. His volumes of short fiction, Books of Blood, earned him immediate praise from horror fans and literary critics alike. He won both the British and World Fantasy Awards, and was nominated for the coveted Booker Prize, Britain’s highest literary award. His bestselling novels include The Damnation Game, Imajica, The Thief of Always, The Great and Secret Show, and Everville. He also created the now-classic Hellraiser films, as well as Nightbreed, and Lord of Illusions.

Ed Gorman, winner of numerous awards, including the Shamus, the Spur, and the International Fiction Writer’s Award, is the author of many novels, including Cold Blue Midnight and the first two Sam McCain mysteries, The Day the Music Died and Wake Up Little Susie. He has also been nominated for the Edgar, the Anthony, the Golden Dagger, and the Bram Stoker Awards. He lives in Cedar Rapids, Iowa.

New York Times and USA Today bestselling author Heather Graham has written over one hundred novels and novellas including category, romantic suspense, historical romance, and paranormal. Married since high school graduation and the mother of five, her greatest love in life remains her family, but she also believes her career has been an incredible gift. Romance Writers of America presented Heather with a Lifetime Achievement Award in 2003.

Date TBD: A Chick Who Reads