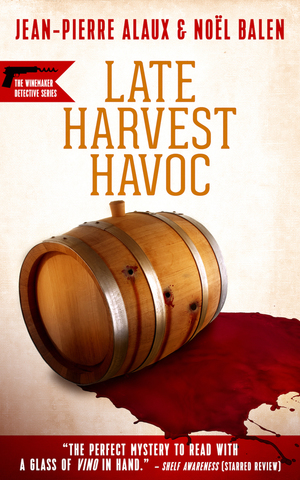 Winter is in the air in Alsace and local customs are sowing trouble, piquing the curiosity of the famous winemaker from Bordeaux, Benjamin Cooker. While the wine expert and his assistant Virgile settle into their hotel in the old city of Colmar, distinguished vineyards are attacked. Is it revenge?

The plot thickens when estates with no apparent connection to one another suffer the same sabotage just days prior to the late harvest. All of Alsace is in turmoil, plunged in the grip of suspicion that traces its roots back to the darkest hours of the German occupation. As he crosses back and forth into Germany from the Alsace he thought he knew so well, Cooker discovers a land of superstition, rivalry, and jealousy. Between tastings of the celebrated wines, he is drawn into the lives and intrigues of the inhabitants.

An episode in a long successful French mysteries series
that is a hit television series now in its fourth season
and attracting an audience of over 4 million.
The series is a huge success in France, Belgium and Switzerland.

Late Harvest Havoc is book 10 in the Winemaker Detective Mysteries. Benjamin Cooker and his assistant Virgile are in Alsace tasting vines. But, they notice when they settle in the little peaceful town of Colmar that not everything is fine with the vineyards. There is someone out there attacking the vineyards. Who is behind it, could it be more than one person, and have it something to do with WW2?

This book felt a bit less charming than the books usually do, the tone is a bit darker. Benjamin Cooker seems to be in an especially foul mood throughout the book. Not at all caring about staying in the little town helping the police. Although when you think about the way he was treated there isn't it hardly surprising that he want to do his business there and move on. Luckily for the police is Virgile all the more interested in helping them. I found it nice to have Virgile flesh out a bit, not just being Benjamins assistant. Sometimes I feel that Benjamin is a bit hard on him. For instance, in this book he accused Virgile of being the reason his car's tires being slashed. He jumped to that conclusion a bit too fast thinking it was because Virgile made some guy jealous because of how Virgile is with the ladies. Actually, in this book Virgile was not flirting with the women that much. He seemed more eager to help the police than seduce some young women.

I must admit that I treated every death as suspicious in this book. I was surprised about the beginning, I thought the death that happened in the cathedral was more sinister than it was. But perhaps it was just a reminder to Benjamin how precious and fleeting life really is. As usual, there aren't that many suspects in the story and it was not to hard to figure it all out. and, to be honest, it was not that most interested case I've read in this series. But I liked how it all came together in the end. When everything was explained. This book had a very good, although tragic ending.

At the end of the tour, Benjamin thanked Jeanne and tried to slip a bill into her hand. She refused it and instead handed him her business card.

“Our cathedral has thousands of treasures,” she whispered in his ear. “I would love to show you all of them—the heraldic sculptures, the three Last Judgment paintings, and, of course, the celestial globe studded with five thousand stars. You must see it! Let’s make a date to meet another day. Shall we?”

“I’m too intimidated by this clock to give you a date, much less a precise time. Let’s leave it to providence…”

Benjamin hoped she would get the message. But instead of saying good-bye, she took his wrist and clung to it for a few seconds. The winemaker was silent. Finally, she let go and turned around to rejoin her tour group. Benjamin felt a twinge of guilt—was it because he had turned the woman down or because he had actually considered making that date with her? No, what he felt was pity for the guide. He was blessed with his wife, Elisabeth, whose intelligence and wit were beyond match.

Benjamin decided to look for Virgile and spotted his assistant ducking into a confessional to answer his cell phone. He’d have a word with him about that. But before he could give the reprimand a second thought, screams rose from the group gathered near the clock.

The winemaker retraced his steps and with some difficulty made his way through the crowd gathered around a small figure on the floor. Above the bloody forehead, he could see a mass of silver hair. Beside the body lay a pair of gold-framed glasses with broken lenses—Jeanne’s glasses.

“What happened?” he asked.

“All of the sudden she just clutched her chest and dropped. She hit her head in the fall.”

From his vantage point on the clock, the Grim Reaper attended the scene, a satisfied smile carved on his jaw. He waved his femur and struck the bell. It was exactly one o’clock in the afternoon. 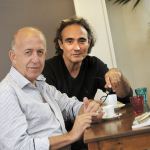 Jean-Pierre Alaux and Noël Balen,
wine lover and music lover respectively,
came up with the idea for the Winemaker Detective series
while sharing a meal,
with a bottle of Château Gaudou 1996,
a red wine from Cahors
with smooth tannins and a balanced nose.

Sally Pane studied French at State University of New York Oswego and the Sorbonne before receiving her Masters Degree in French Literature from the University of Colorado where she wrote Camus and the Americas: A Thematic Analysis of Three Works Based on His Journaux de Voyage. Her career includes more than twenty years of translating and teaching French and Italian at Berlitz and at University of Colorado Boulder. She has worked in scientific, legal and literary translation; her literary translations include Operatic Arias; Singers Edition, and Reality and the Untheorizable by Clément Rosset, along with a number of titles in the Winemaker Detective series. She also served as the interpreter for the government cabinet of Rwanda and translated for Dian Fossey’s Digit Fund. In addition to her passion for French, she has studied Italian at Colorado University, in Rome and in Siena. She lives in Boulder, Colorado with her husband.
Follow Le French Book on Twitter  | on Facebook
Sign up to receive their latest news and deals.

Buy the book | on Indiebound | Amazon | on Barnes & Noble

Thursday, January 7
Review + Giveaway at Queen of All She Reads 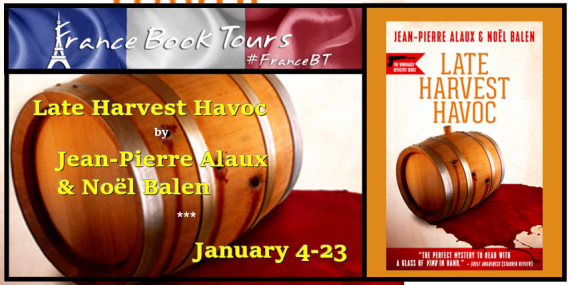